This vegan pumpkin mac and cheese recipe was created in partnership with my friends at Pacific Foods. Thanks as always for supporting the brands that make all my gluten-free pasta cravings possible!

Despite growing up in the crunchiest, most granola-y of households, I didn’t encounter nutritional yeast until a few weeks ago. 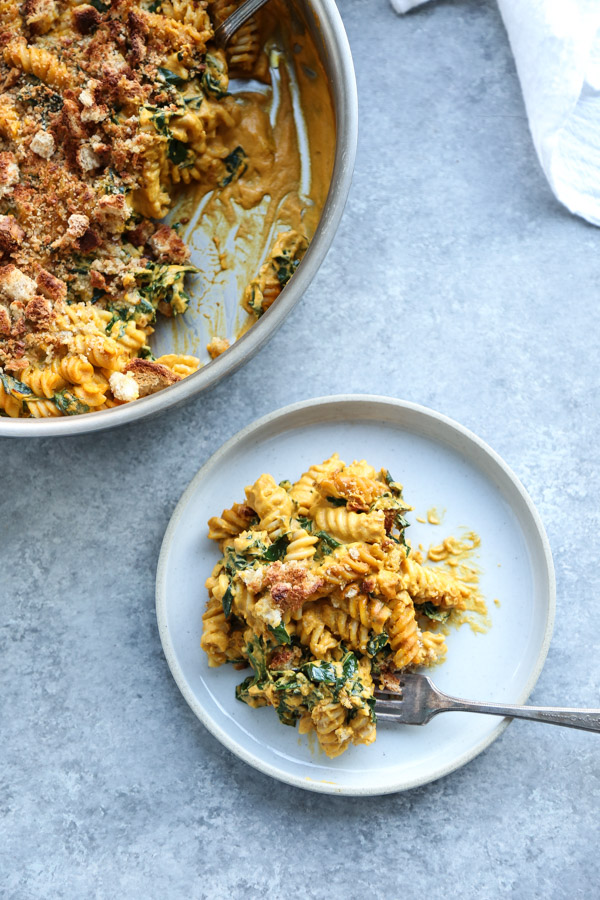 The encounter was prompted by this creamy vegan spinach artichoke dip, and came to fruition thanks to Thrive Market delivering a box of obscure health food store favorites on my doorstep.

If you don’t know what nutritional yeast is (I didn’t really), here’s the cliff’s notes: unlike the type of yeast that’s used to catalyze the fermentation process for bread and beer, nutritional yeast is made from sugar cane (not hops) and is deactivated. If you heard the word yeast and immediately started to have candida nightmares, don’t worry. This is not that kind of yeast, and even if you have a bit of a bad yeast problem, it has no effect on the body.

The reason why people seek out this strange flakey powder—a finely ground cross between wood chips and bonito flakes—is it’s packed with B vitamins, amino acids, and a host of other minerals. Vitamin B12 is one of the biggest nutrient deficiencies found in Hashimoto’s sufferers. While it’s not naturally produced by nutritional yeast, many products on the market are often fortified with it, making it a very tasty way to eat your vitamins. 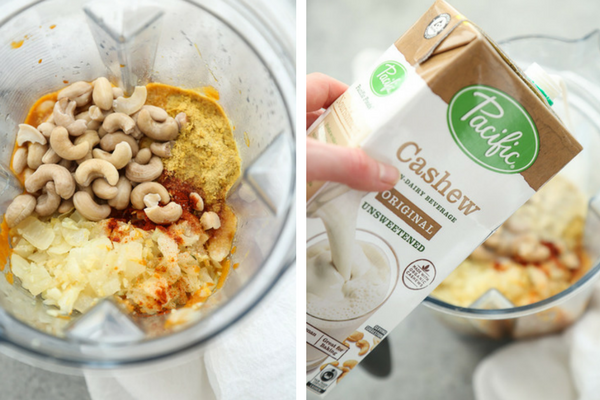 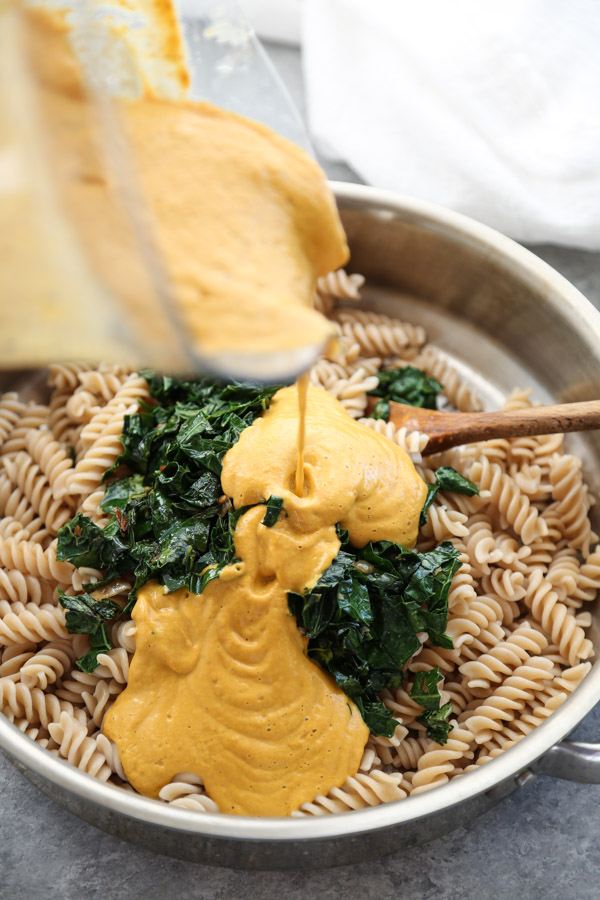 And speaking of tasty, the reason so many plant-based folks gravitate towards nutritional yeast is because of the flavor—nutty, cheesy, savory. It adds that je ne sais quoi to many vegan versions of classic comfort food, including bone broth, gravy, and other creamy sauces.

After experimenting with the dip, I knew the next stop on my nutritional yeast journey was a creamy vegan mac and cheese, preferably one that resembled the bright orange goo of my favorite childhood microwavable version. 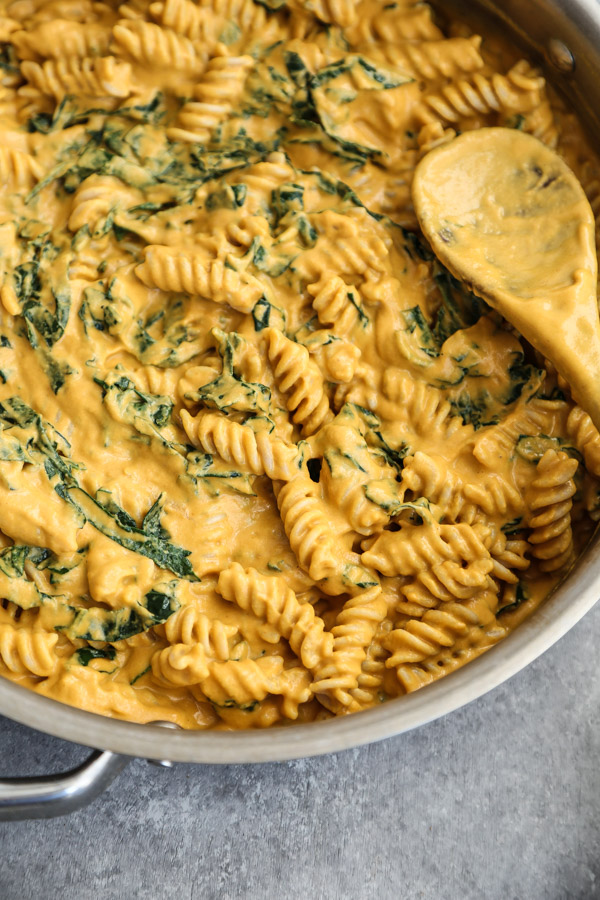 To make the base as creamy as possible, I used a combination of Pacific Foods Cashew Unsweetened Original Non-Dairy Beverage, which on the richness spectrum, is one of the creamiest non-dairy milks around, and their Organic Pumpkin Puree, which is looser than most purees you get in a can and already has an amazing saucy consistency. Whole raw cashews give the sauce even more body, and lemon juice, miso paste and smoked paprika gave the nutritional yeast extra umami, smoke and saltiness.

If you’ve been looking to incorporate more plant-based foods into your diet (or have that on the agenda for the New Year) get thee some nutritional yeast and have at this pumpkin mac and cheese recipe. 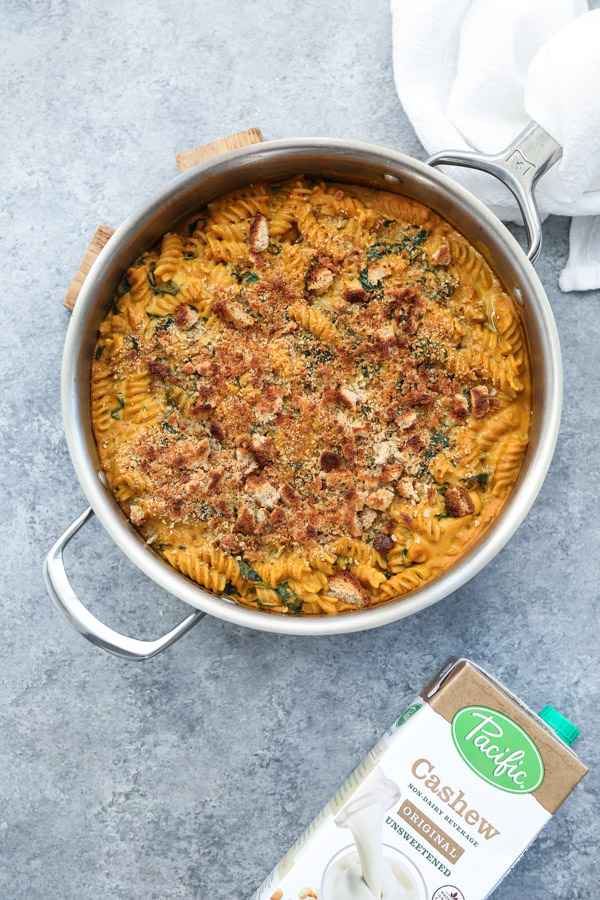 Now that Charlie is dairy-free we have an even harder time finding ways to recreate our comfort food favorites. He was particularly excited about this recipe and couldn’t get over how much it hit all the same notes as my old mac and cheese recipe used to, without the distressing intestinal aftermath.

In other news, I head to LA this week for a few days to tape another episode of Hallmark Home and Family! And eat avocados. Duh. If there are any new spots I should check out, let me know! 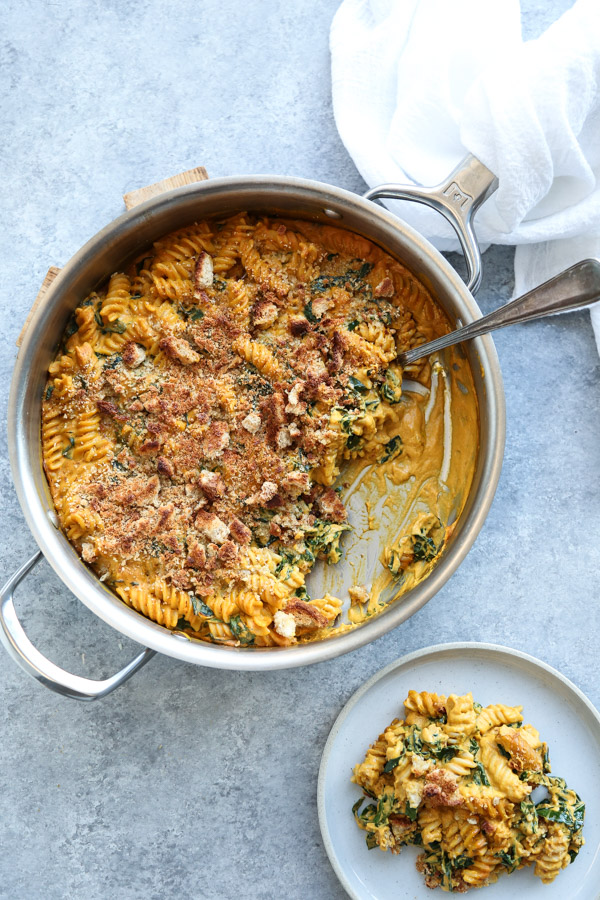 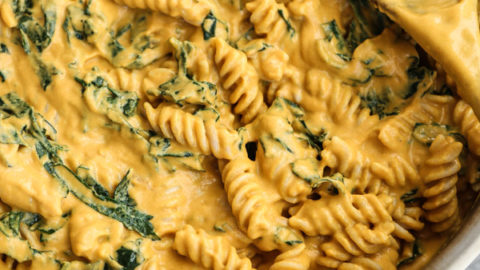 5 from 1 vote
print recipe
This vegan mac and cheese gets it's creamy base from a mixture of pumpkin, cashews, and cashew milk. It's made even healthier with gluten-free pasta and kale!
Prep Time 20 minutes
Cook Time 10 minutes
Total Time 30 minutes
Servings 4
Author Phoebe Lapine

This vegan pumpkin mac and cheese recipe was created in partnership with my friends at Pacific Foods. Thanks as always for supporting the brands that make all my gluten-free pasta cravings possible!