These gluten-free veggie nuggets are brought to you in partnership with my friends Little Northern Bakehouse. As always opinions are 100 percent my own. Thank you for supporting the brands that make this site and my vegan nuggets recipes possible!

Back in college, I was a connoisseur of frozen vegan nuggets.

A true tween of the late 90’s, I was fully on the soy train and rode that baby all the way from Starbucks to the Whole Foods freezer aisle, where I would load up my own mini fridge with faux meat burgers and soy crusted nuggets.

I had fallen for that age old myth that somehow a hyper processed oval shaped bite was healthier than a whole food simply because it had a few dietary labels slapped on the front.

Much to my dismay, I was not alone. As soon as I moved off campus into a house with 6 other girls, my precious freezer nuggets began mysteriously disappearing. Usually they would go missing around 1am once the bars got out. The only evidence, an empty box, respectfully placed back in the freezer, and a few crumbs in the microwave. Obviously, there wouldn’t be any plates in the sink, because I lived with animals.

It took many years to realize that those drunk thieves were actually doing me a favor. I’ve since gotten soy almost entirely out of my diet, and when I do buy anything from the freezer aisle, it has to be made up of whole food ingredients.

When I can though I try to make my own freezer veggie nuggets and burgers. These kale and sweet potato veggie nuggets were a recent experiment for back to school season as I prepare to log some serious time at my desk finishing the SIBO Made Simple book – not unlike those late nights at the library that kept me from bar crawls and late night nugget binges.

These cuties are made up of frozen kale (a great time saver), sweet potato and gluten-free vegan breadcrumbs, thanks to this Seeds and Grains bread. They are one of the few brands at the market that make gluten-free bread that is also egg-free. Their products are sourced from non-GMO and whole-food ingredients, and feature fiber-rich seeds and grains for a boost in nutrition. Many are also 100% plant-based and vegan, appealing to a wide-variety of diets and food preferences. Most importantly, they are certified as Glyphosate Residue Free by third-party testing so consumers don’t have to worry about this cancer-causing substance.

If you’re more a traditional gluten-free veggie burger lover, you will also want to try my Faux Falafel Gluten-Free Veggie Burgers and this Gluten-Free Red Lentil Burger Recipe, both of which can be low FODMAP in one serving.

You’ll be amazed by how quickly these veggie nuggets come together with a little semi-homemade help from the store. You can enjoy them with any sauce of your choosing and freeze them for any future last minute lunch or study break. Read on for the recipe! 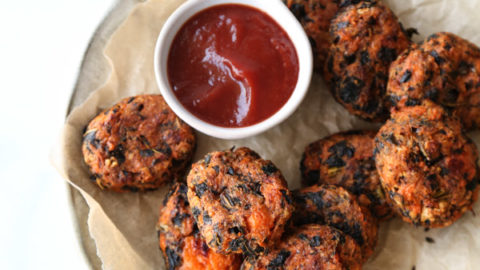 4.34 from 3 votes
print recipe
These healthy gluten-free veggie nuggets are a great alternative to what's in your frozen foods aisle. They come together with just a few ingredients and will keep your lunchbox the envy of the whole class.
Prep Time 15 minutes
Cook Time 1 hour 15 minutes
Servings 8
Author Phoebe Lapine

If you make this, tag @phoebelapine and #feedmephoebe – I’d love to see it!
278 shares