I’m constantly in search of ways to have my frosé and drink it too. 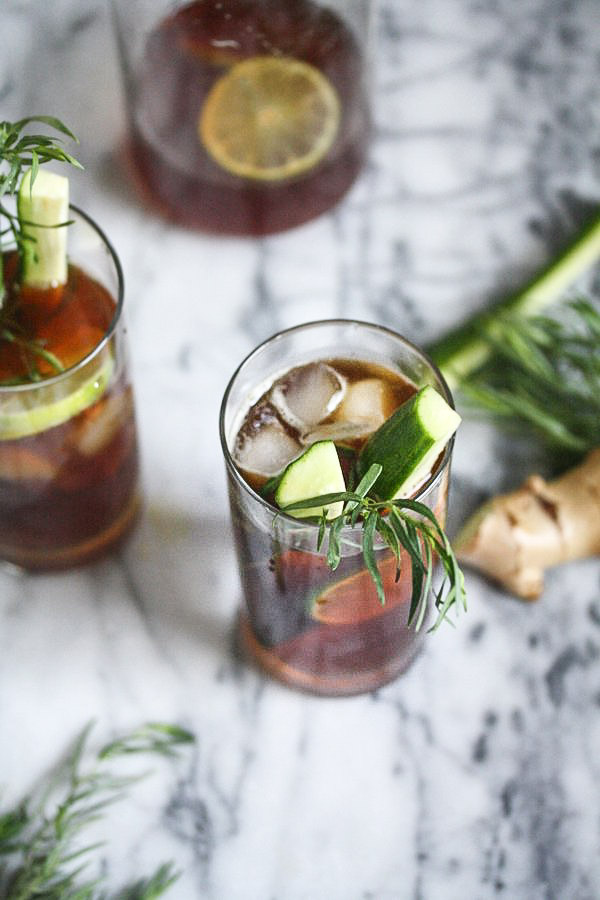 There’s just something about summer that drives me to booze. Luckily, for the exact opposite reasons that might drive someone to hole up in the dead of winter with a mug of mulled wine for fear of going outside in the cold. And it’s for these reasons–lounging on the beach, grilling in the yard, soaking up the company of friends come happy hour–that make summer drinking a healthier past time than sheer units of alcohol consumed might imply.

If you’re looking for ways to offset your bottomless glass of Whispering Angel during the workday, remember to eat plenty of lacto-fermented foods, blood sugar friendly fiber, and liver-supporting Farmer’s Market herbs and veggies (especially cilantro!). A jug of water and an afternoon of sweating it out in the surf could’t hurt either.

Still, there are some ways that you can get your summer cocktail game on with a little healthy hedonism in mind. 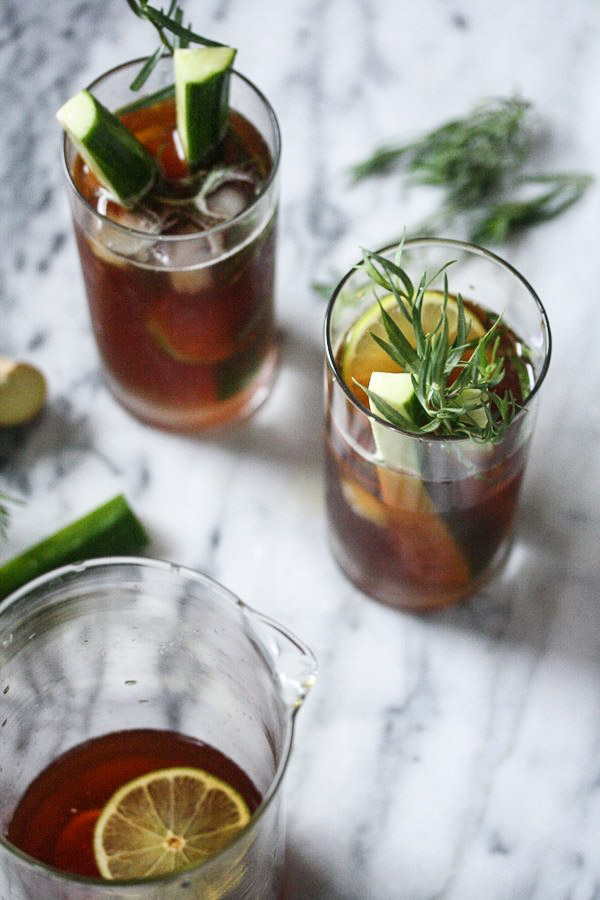 At the bottom of this post, I have a new video that I made with AOL that shows off two homemade drinks: Hibiscus Arnold Palmers and Healthy Pimm’s Cup Cocktail. They both replace sugary simple syrup with natural sweeteners and add a bunch of antioxidant-rich ingredients to the mix.

The inspiration for this herby spin on Pimm’s Cup Cocktail hit two summers ago. Charlie was out in LA for work, and I decided to join him for a little mini vacation. We stayed at a trendy new-ish hotel called The Line in Koreatown, and spent Friday afternoon playing hookey from life and lounging by the pool.

In addition to a café called Pot, which left me confused and slightly disappointed when I flipped to the room service tab by the same name, the hotel housed Roy Choi’s restaurant Commissary. I’m a big fan of the movie Chef (duh), which Choi consulted on. But had never eaten any of his food.

Sadly, my breakfast was slightly underwhelming. But the cocktail menu, which we explored probably a little too heavily on our day in the sun, was deeply inspired.

All the drinks were served in plastic pint containers—a very cheeky, chef-y way to avoid the no glass rule by the water—and used interesting combinations of herbs. One of my favorites was a savory, Asian-inspired take on Pimm’s cup with shiso leaves.

A classic Pimm’s cup recipe usually includes some combination of sliced cucumber, strawberries and citrus fruit. The add-ins are subject to interpretation, just like your basic sangria. But Pimm’s drinks are typically topped off with ginger ale or lemon lime soda for sweetness and fizz. 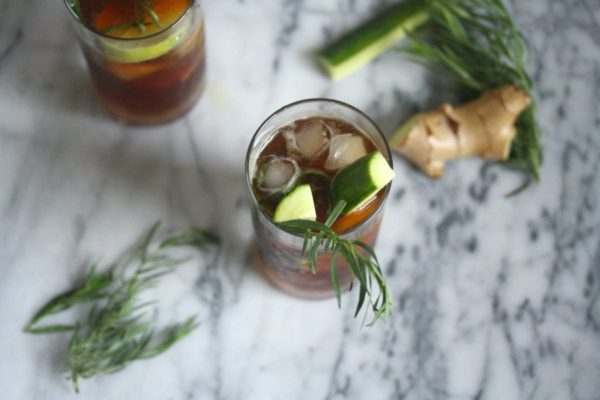 As you know, I’m not one for overly fruity anything, and I don’t particularly like random chunks of apple in my wine or vodka. So I was relieved that my poolside Pimm’s punch was full of flavor without any of the actual fruit.

Instead of using soda, I made my own fresh ginger simple syrup. It’s only slightly sweet with a tablespoon of maple syrup. You can add more if you like, especially since there isn’t any fruit hanging out adding more natural sugars to the mix. And in place of the shiso leaves, which can be hard to find, I used a few bushy sprigs of fresh tarragon. I liked how the anise played nicely with the cucumber–an obligatory vegetable for any refreshing summer cocktail. 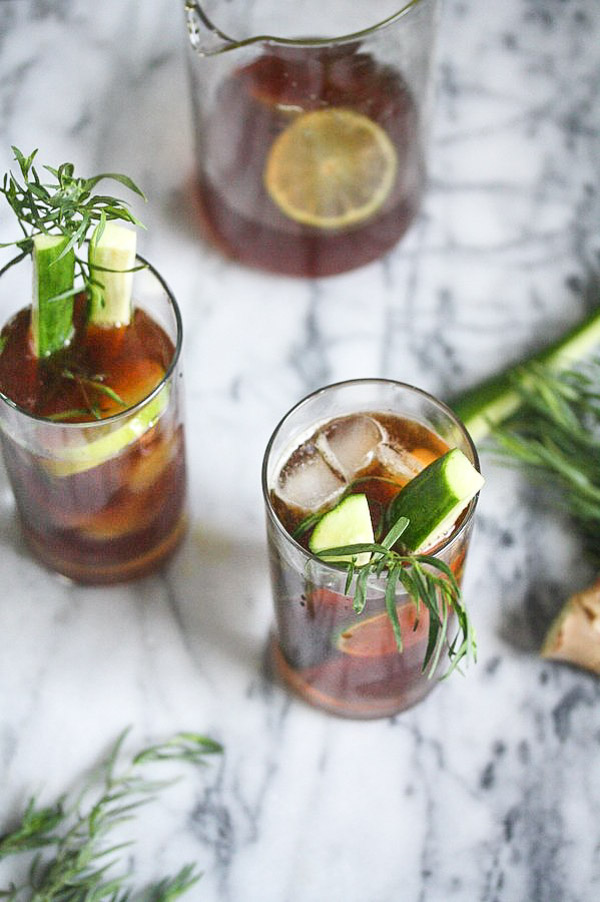 You can make a big batch and serve it out of a pitcher, or feel free to load up a few leftover pint containers with ice and pour yourself a chef-y over-sized portion of this Pimm’s cup recipe. If you get over-served, at least you won’t risk breaking a glass.

Check out the video below for how to make it, along with another favorite healthy summer cocktail, these Hibiscus Arnold Palmer’s! 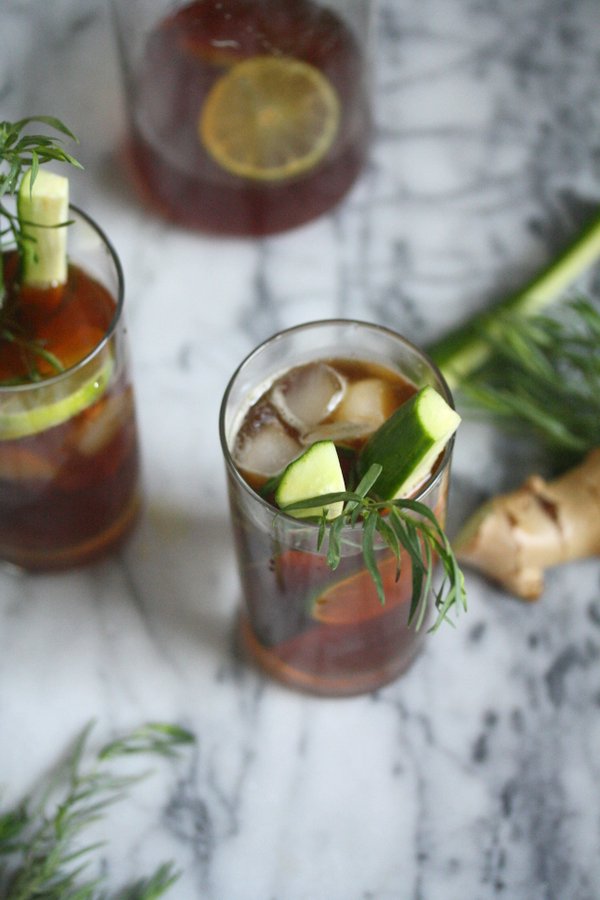 If you make this, tag @phoebelapine and #feedmephoebe - I'd love to see it!
129 shares