If you’ve been a reader here for a while, then you know that Thanksgiving stuffing is my thing. 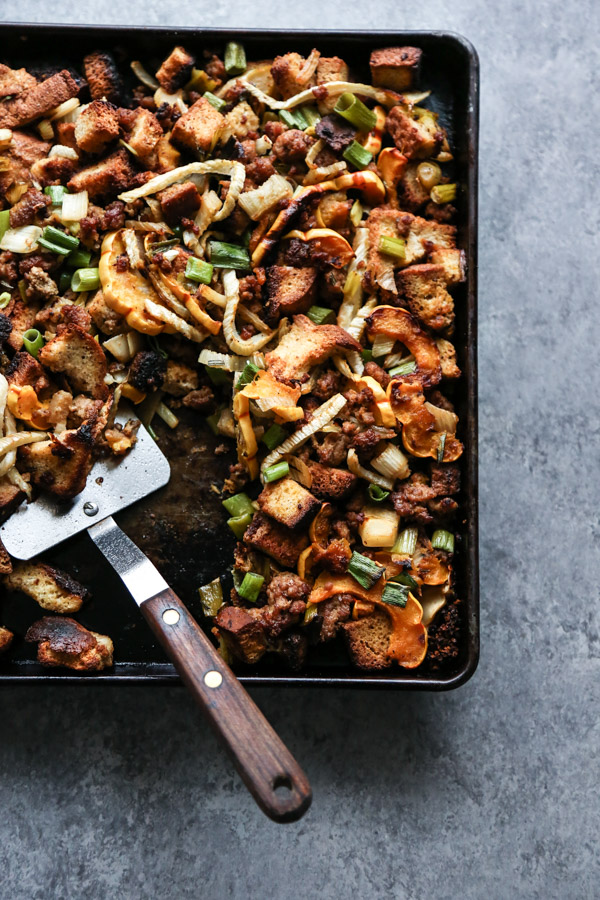 Ironically, it was always my least favorite offering on the table as a kid. But that is perhaps why at some point in my teens, I decided to make it mine.

Since then, I’ve tried countless versions. There was the sweet and savory bread version with pumpkin and leeks. The gluten-free cornbread dressing with woodsy wild rice and cranberries. And most recently, the vegan “creamed” spinach stuffing casserole. 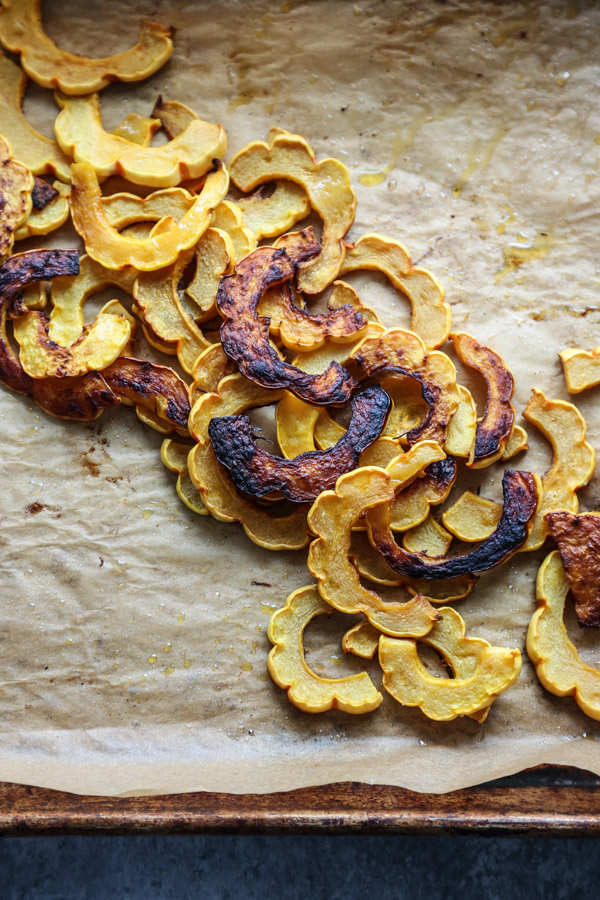 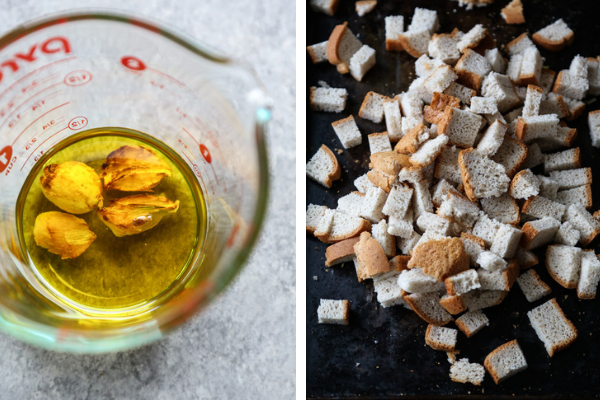 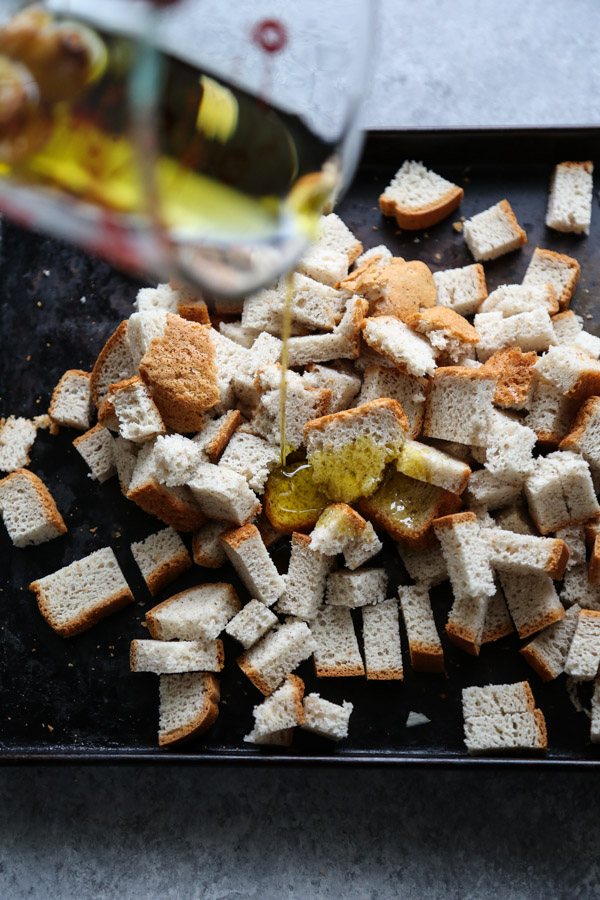 That doesn’t even count all the other flavor combinations in between, which I usually can’t even remember by the following year. I think 2017 was mushrooms and kale…?

This year, even though I’m back on the FODMAP train, I thought it could be a fun challenge to put together a low FODMAP stuffing recipe for those avoiding garlic and onion this Thanksgiving season (good luck to you!). 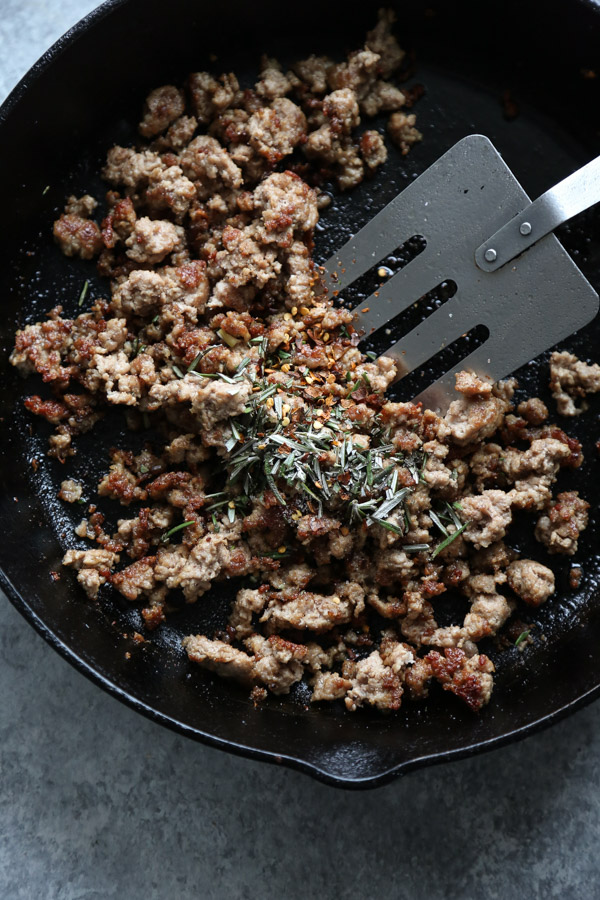 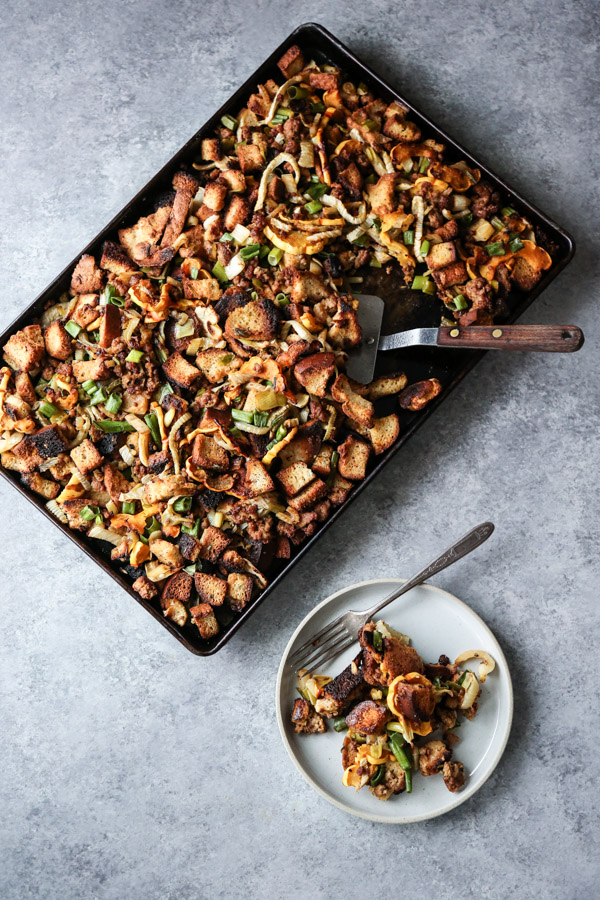 Fennel is one of my favorite strategies for adding the crunch you miss out on with no onion in the mix, and it also adds a lovely sweetness when roasted. Even when I’m not using cornbread as the base, I like giving my savory stuffings a bit of nature’s candy to balance out all the earthy fall flavors, like rosemary, which I added to the ground pork to create my own homemade sausage base.

Delicata squash is another addition that adds a pop of sweet. There’s not a lot of information out there about this particular winter squash being low FODMAP, but spread throughout the stuffing, the serving size becomes small enough that I assume it’s manageable (butternut squash is ok at 1/4 cup servings). 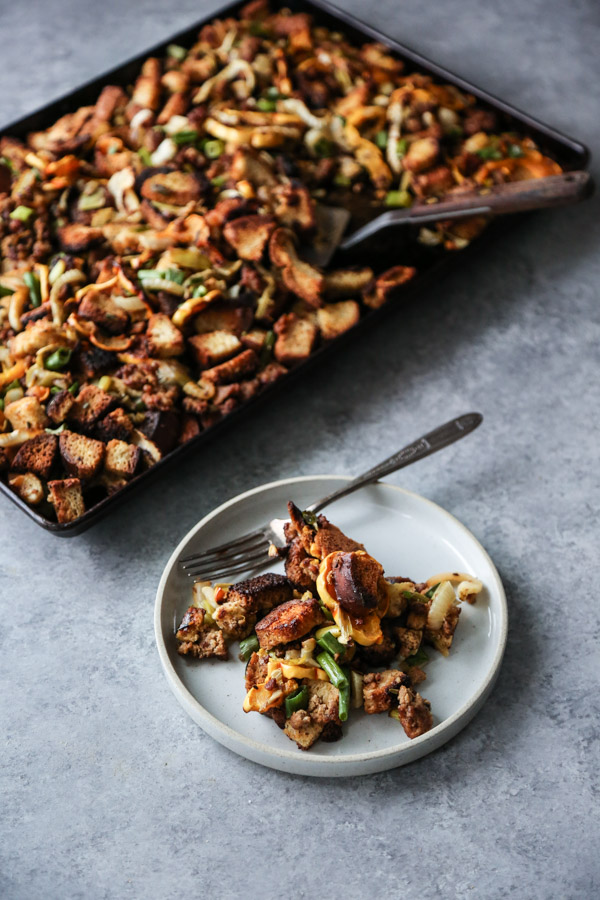 Finally, I use the green tops of scallions to give the stuffing recipe that onion flavor and pop of color. If you’re not watching your FODMAPS, feel free to use the whole scallion, premade hot Italian sausage instead of the pork, and minced garlic (instead of just infused). Also, you can omit the sausage for a vegetarian version.

Regardless of the dietary restrictions, this combination–the roasted fennel, squash and sausage–is going to be a winner for years to come. 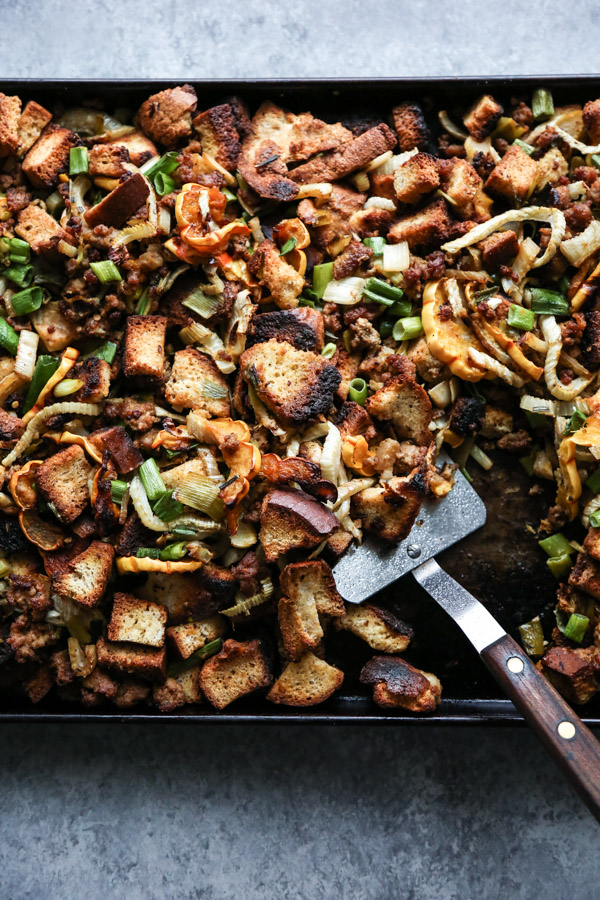 What other Thanksgiving or holiday dishes are you hoping for dietary solutions for? Please leave your requests in the comments section!

Finally, if you’re looking for some great wines to bring to yr family gathering, here are the best organic and biodynamic red and white wines! 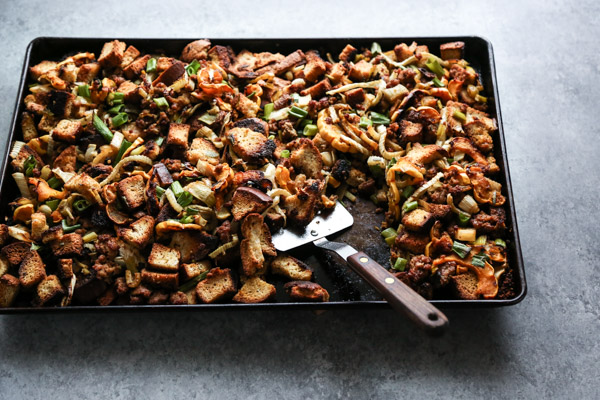 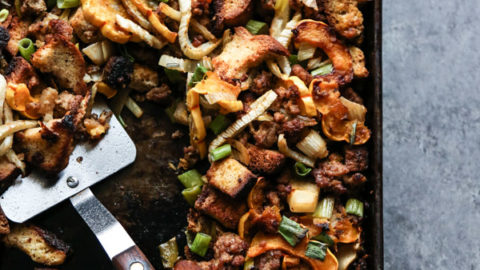 5 from 2 votes
print recipe
This low FODMAP stuffing recipe is packed with flavor and healthy vegetables. It’s a perfect no fuss dish for Thanksgiving, especially using a sheet pan as the cooking and serving vehicle. It also makes for an exceptionally crispy stuffing, which is always the best part anyway. If FODMAPS aren’t a concern feel free to add a diced onion to the sausage and keep the garlic cloves in the mix.
Prep Time 15 minutes
Cook Time 1 hour 10 minutes
Total Time 1 hour 25 minutes
Servings 8
Author Phoebe Lapine

If you make this, tag @phoebelapine and #feedmephoebe - I'd love to see it!
723 shares