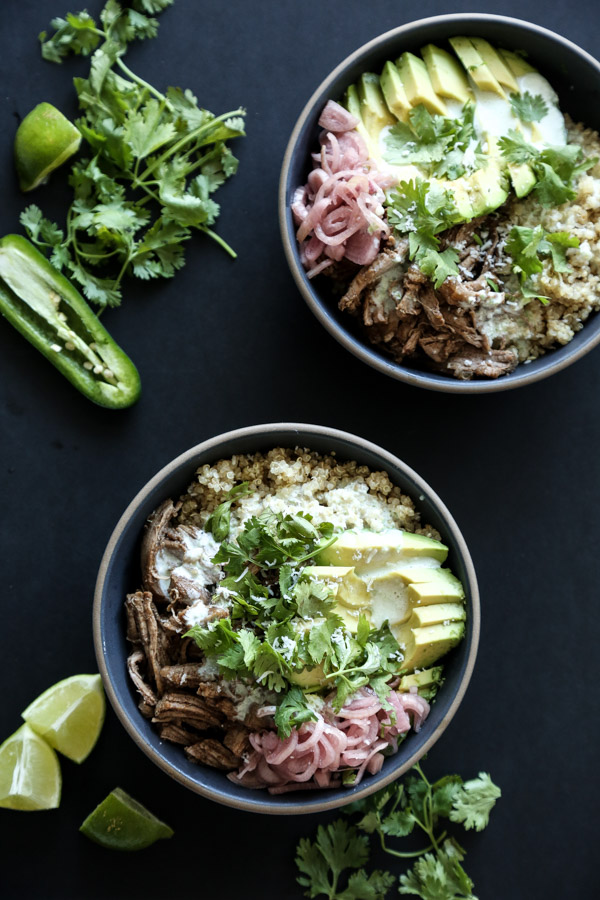 A few weeks ago a beautiful new cookbook landed on my doorstep.

As a psycho like myself is prone to do, I immediately went through with a pad of sticky arrows to determine the first recipe that should be initiated into my kitchen. And after a brief flirtation with dukka salmon patties and firefly falafel, I knew that I had to have this super speedy five spice pulled pork, and I knew that I had to have it as part of a tricked out burrito bowl recipe. And true to its speedy promise, it only took me an hour to get everything I wanted.

If only life always happened this way. Sigh. 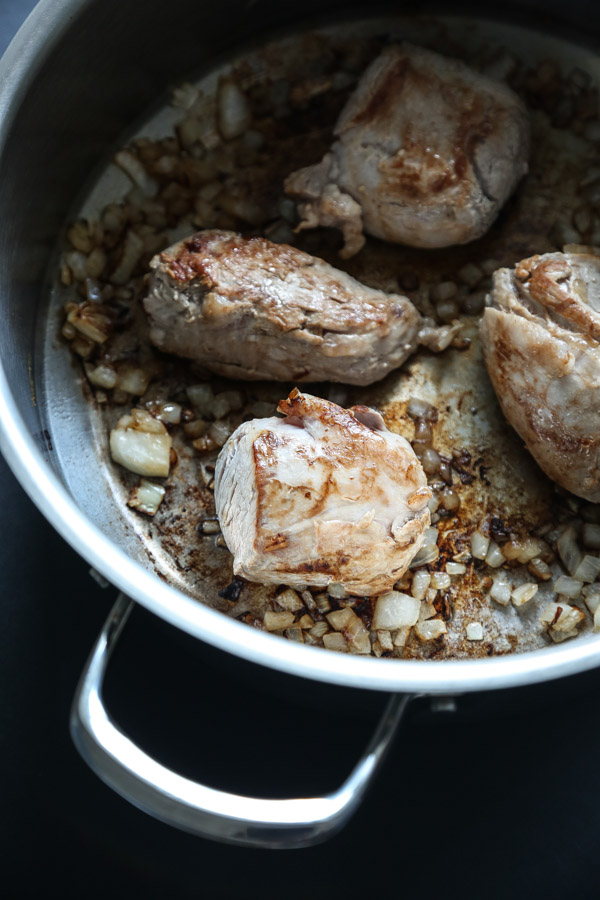 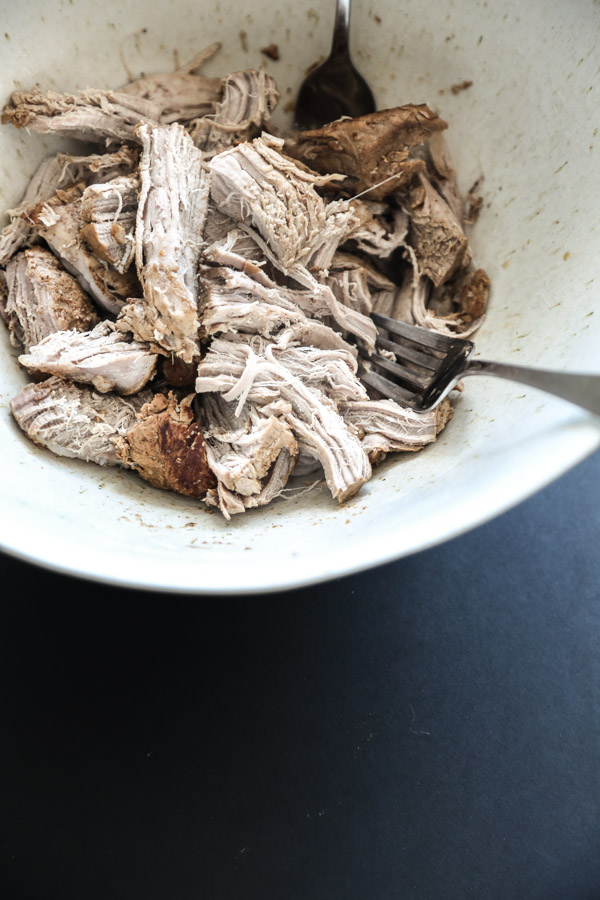 The only catch was, true to the title of the book itself, the pork recipe contained no salt. And that turned out not to be a catch at all, because the end result was so packed with flavor, I might have eaten a whole bowl of it (sans the other seasoned accoutrements of my burrito bowl), anyway.

So let’s talk about this queen of Low-So(dium) living.

I first got to know Jessica Goldman Foung many years ago on the internet. This was way way back in the day, before FMP was even my virtual home. At that point, I had already been diagnosed with Hashimotos, but was still very much in denial, despite the fact that my body’s relationship with food had already changed drastically.

My favorite colleague (my stomach) decided it was no longer willing to work the long, thankless hours putting out the fires of my day job’s hedonism. And as you’ve heard me discuss in the context of my wellness project, eventually I gave up gluten, along with all the pizza and pain that came with it. 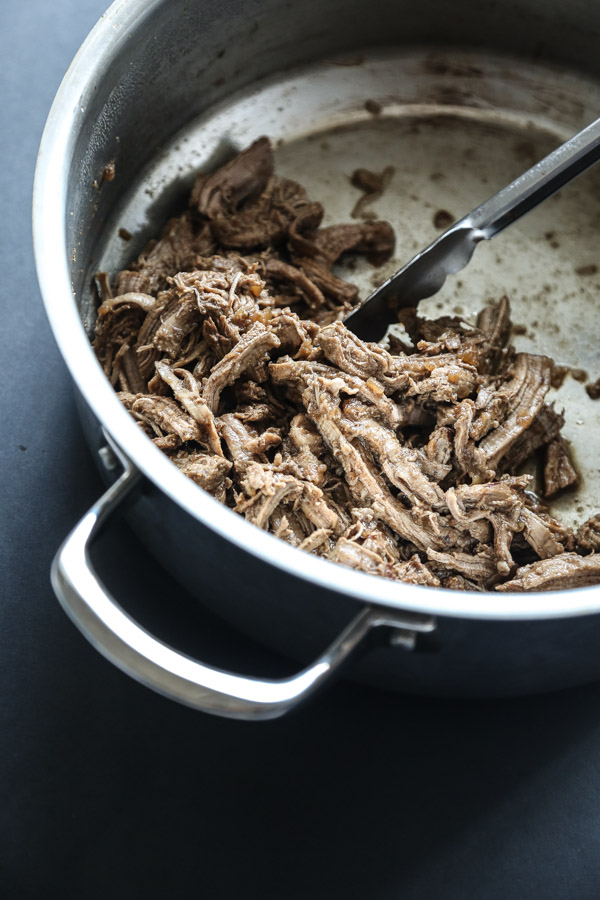 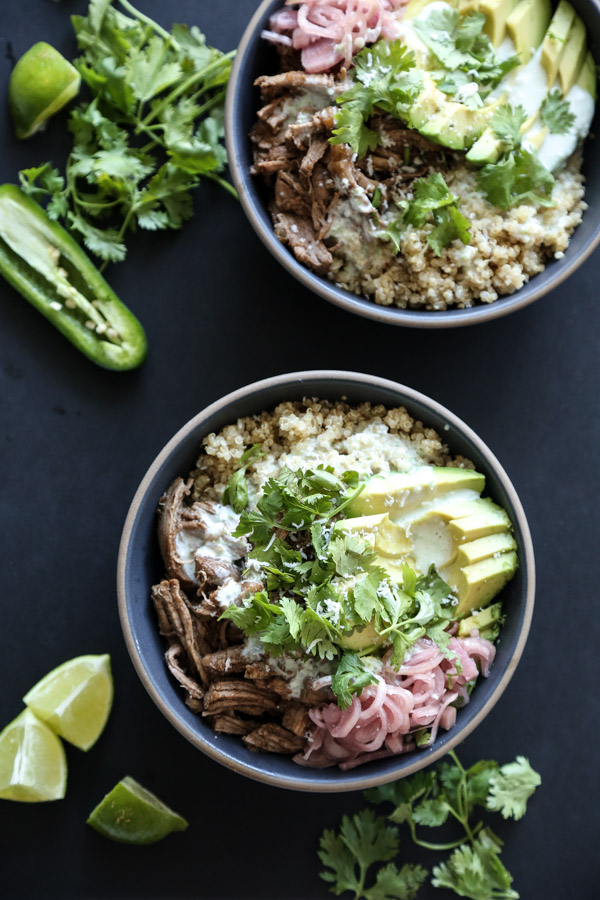 It sounds silly that anyone could be so terrified of not eating pasta. But the change felt like it had huge ramifications not just for my sense of self, but my billable hours making food for other people. The transition was rough. And the only thing that made it slightly easier was my team of internet food friends who had already been through much of the same and were thriving.

The terror of giving up pasta sounds even sillier when you consider what Jess had to give up in the face of her own autoimmune disease: sodium.

After being diagnosed with lupus-related kidney failure in 2004, she started a low-so diet to keep herself healthy. And while I knew what that meant in terms of taste buds, it took until our first face-to-face breakfast in San Francisco for me to fully wrap my mind around how her dietary restrictions affected the way she ate out in the world.

Not only are packaged foods a landmine, but so are restaurants. It’s often not simply enough to ask for foods to be unsalted, because nearly every prepped element of a dish already has been. The veggies sitting underneath your seared fish? Like that expertly cooked pasta, they’ve already been par-boiled in a pot of heavily salted water. 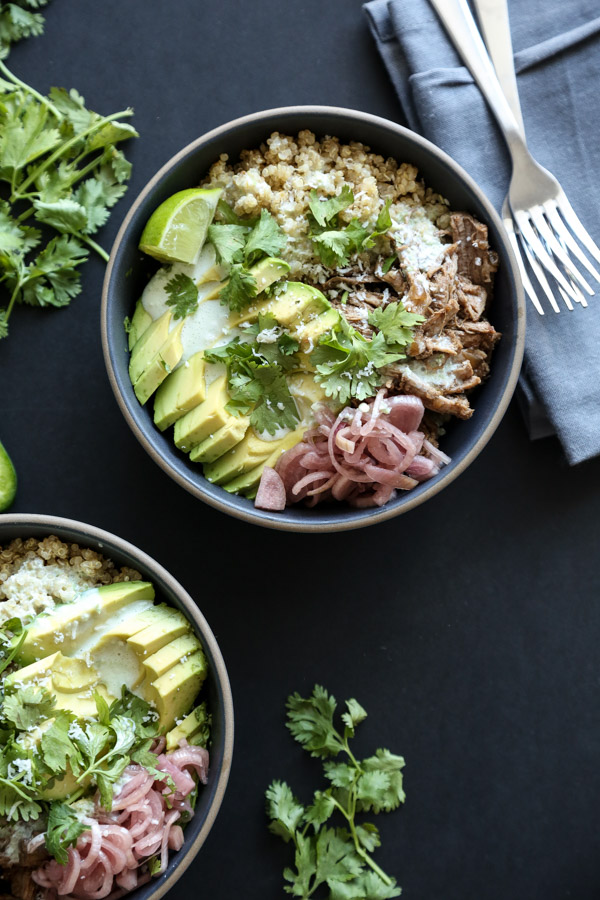 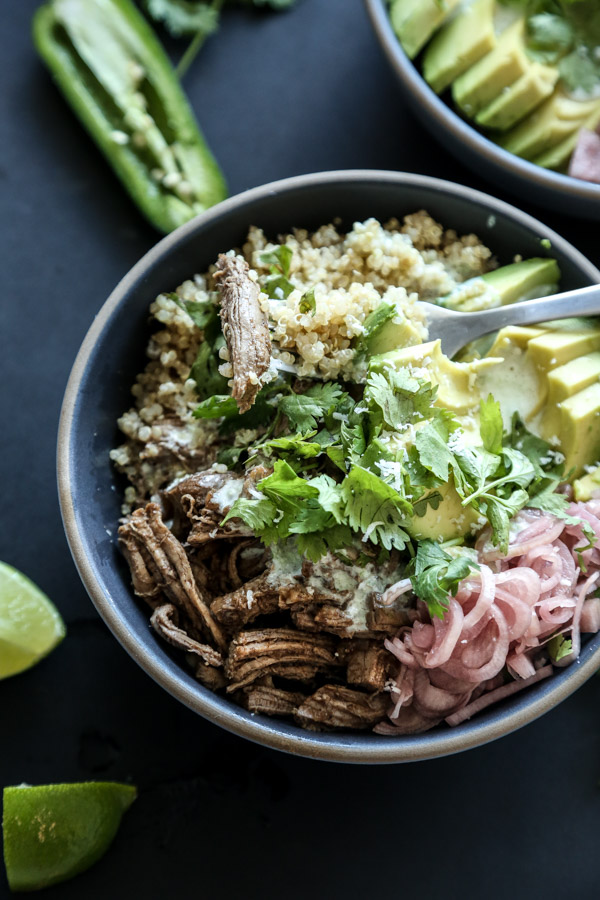 To avoid even the slightest misstep and to ensure that her needs were taken seriously, Jess proceeded to pull one of the most baller dietary restriction moves I’ve ever seen: she handed a laminated card to the server and asked him to deliver it to the chef. On it was a lovely note explaining her story, pointing out exactly what to look out for, and asking for a little hospitality in delivering her a meal she could actually eat. You go, Glen Coco!

All of this is to say, if you’re new to a low-sodium diet, Jess’ book Low-So Good will be your new bible. It’s full of advice (including some from yours truly) about every aspect of living with this type of restriction. And for those of us who aren’t, it’s simply a beautiful cookbook that shows the key to good eats is real food with big flavor.

This quick pulled pork recipe is a genius weeknight hack. Instead of resorting to a slow cooker (I’m still learning how to use the Crock Pot I inherited from Charlie), Jess gives pork tenderloin a quick sear on the stovetop and braises it in a mixture of (salt-free!) Chinese five spice powder, cider vinegar and apricot jam. I omitted the honey, since I’m as low-su as possible these days, but the final product was still perfectly sweet and sour. It was a great Asian spin on the Mexican-style carnitas I usually seek out for my burrito bowls, and took a fifth of the time. 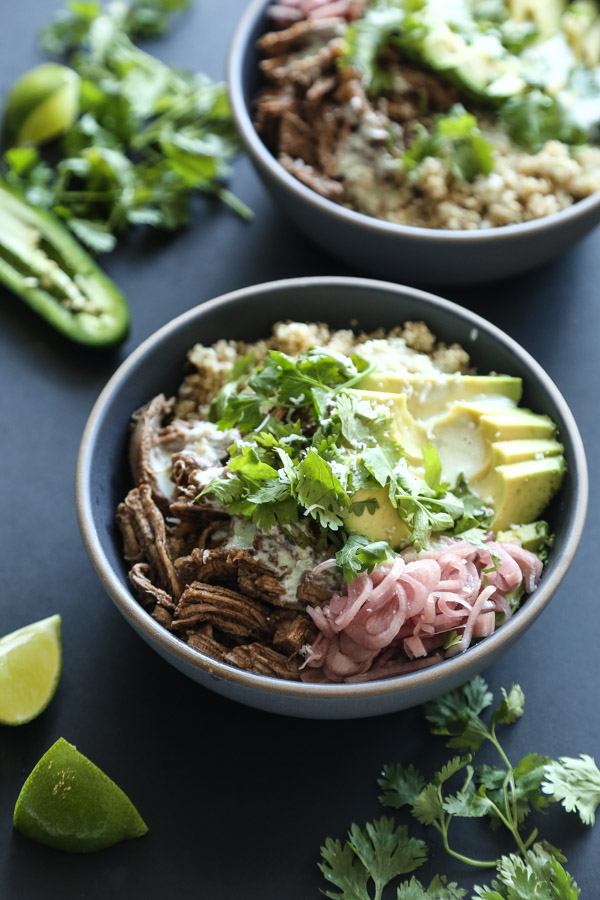 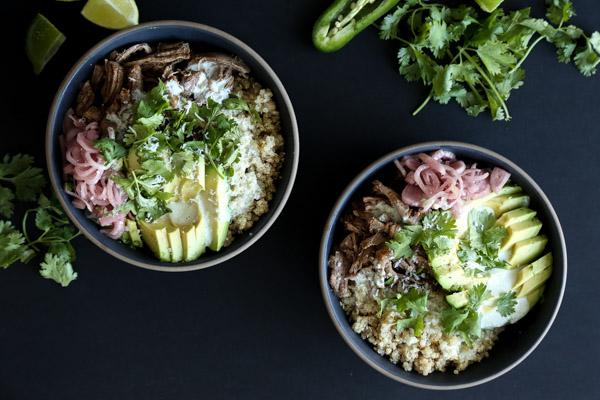 The other parts of the bowl are incredibly flex. If you want to dip back into Mexican territory, you can add black beans or chopped romaine. I used some sliced shallots and gave them a quick pickle while the meat was braising. That’s an extra step, so feel free to just use raw if you don’t mind the pungent onion flavor. And obviously avocado is a prerequisite, so feel free to mash, dice or whatever, but you are required by law to include it.

The other delicious healthy element is a play on Mexican crema. Instead of sour cream I used gut-friendly lactose-free Kefir pureed with lime juice and jalapeno as a quick dressing. You can thicken it with some Greek yogurt, or if you don’t have Kefir, just use yogurt in the first place and dilute it with water until it’s a more drizzlable consistency.

All of these elements, minus the obligatory avocado, can be made up to 4 days in advance, so it’s a perfect option for your weekend batch cooking session, and the weeknight dinners or #brownbagswag thereafter.

And speaking of weeknight dinners, have you nominated FMP yet for a Saveur Blog Award? If not, I would love your support! You can vote for me here in the category of Most Inspired Weeknight Dinners, or The Obsessive Award for gluten-free cooking. Thank you in advance!! 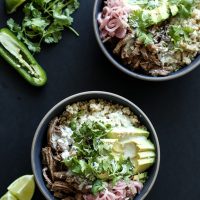 5 from 1 vote
Print Recipe
The brilliant quick pulled pork is adapted from Low-So Good by Jessica Goldman Foung. Note that this recipe is intentionally low-sodium, hence the title of her book. If sodium isn’t an issue for you, you can season the pork, quinoa and crema with a modest amount of sea salt (see note)!
Prep Time 10 minutes
Cook Time 50 minutes
Total Time 1 hour
Servings 4
Author Phoebe Lapine

• The pork and quinoa can be made up to 4 days in advance and kept in separate airtight containers in the fridge. • If you don’t mind one more step, doing a quick pickle on the shallots is a delicious way to upgrade them, especially if you don’t like the flavor of raw onion. Toss them with 1 tablespoon cider vinegar, 1 teaspoon honey, and 1/2 teaspoon salt and let them sit for 10 minutes while the pork is cooking. You can also make up to 2 weeks in advance. • If you don’t have Kefir or can’t find it, sub 1/2 cup Greek yogurt + 1/2 cup water. • If sodium is not a dietary concern, add 1 teaspoon sea salt to the pork (along with the other spices), 1/2 teaspoon to the quinoa (along with the water), and 1/4 teaspoon to the dressing.

If you make this, tag @phoebelapine and #feedmephoebe - I'd love to see it!
212 shares