I didn’t think it was possible to feel full from half a dozen oysters, but that was before I went down to The Big Easy.

It was only my second visit to New Orleans. The first was right after Katrina, and much of the city was still recovering. So needless to say, this trip really felt like the true taste of all the city had to offer.

Our first stop was at Peche, a modern seafood joint that was raved about by nearly every friend I pestered for food recommendations. By 6pm, there was already a 2 hour wait for a table. So Charlie and I posted up at the bar and did what we usually do: we ordered oysters.

When the big baddies from the Gulf showed up, we were equal parts impressed and terrified. One was as hefty and long as my palm. It looked more like a cow’s tongue than a shellfish—an ideal body mass for deep-frying and stuffing inside a po’boy, but not for taking down in one slurp.

I struggled awkwardly to bite them in half after my gag reflex and I came dangerously close to admitting defeat. Not a good look at an intimate table for two, but even less so at a crowded bar full of locals. Luckily, Charlie manned up and took the last few off my hands, which felt like the right team decision since I was already suffering through watching him eat some ridiculous-looking catfish stuffed shrimp. 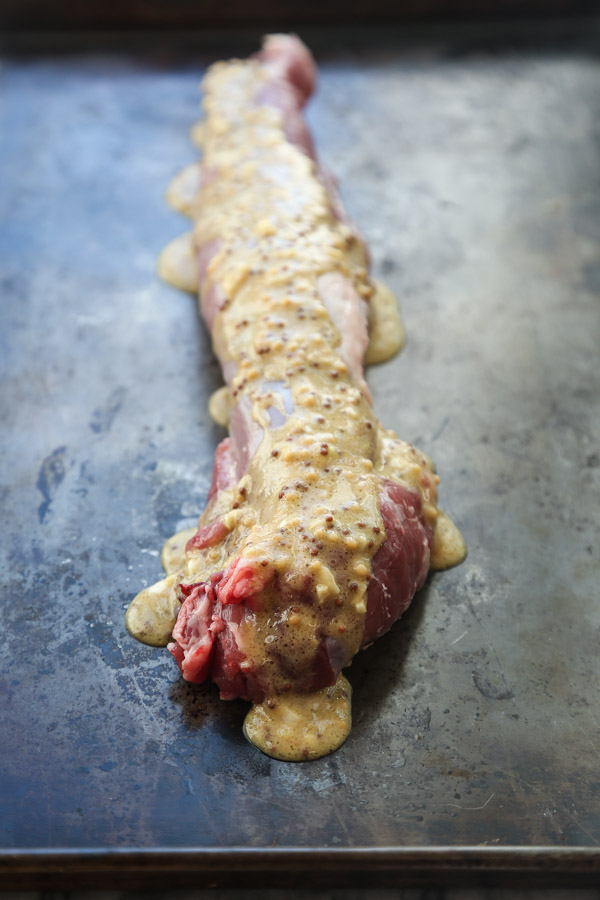 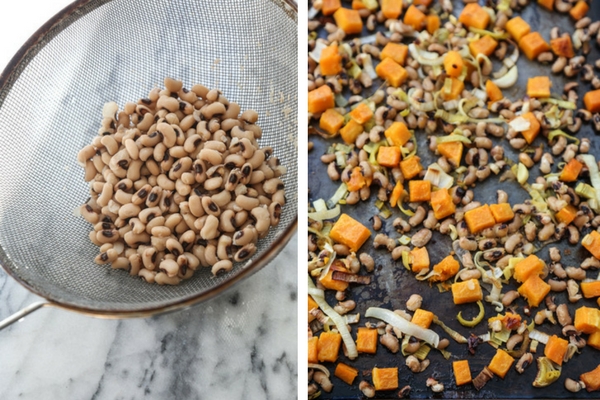 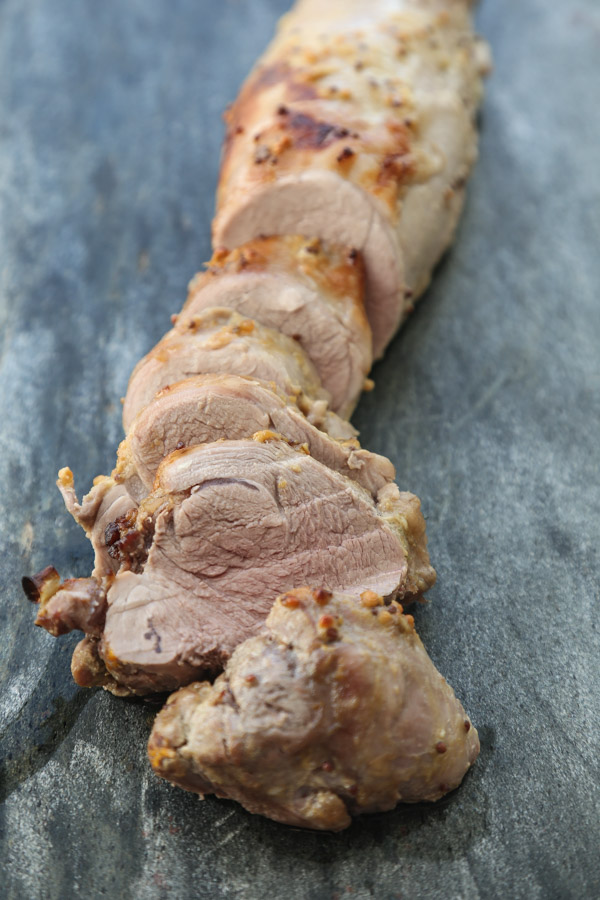 Unfortunately for us glutards, the best things in NOLA are deep fried and/or stuffed inside a sandwich. And if it hadn’t been for the bowls upon bowls of late night jambalaya, the FOMO might have killed me quicker than the flour.

Despite the theme of breading and beignets, one small healthy hedonism brownie point we can all find solace in is that NOLA specialties usually contain a much more modest amount of meat (with the exception of the plate of ribs I enjoyed at The Joint). Rice is used in jambalaya and gumbo to make a little protein go a long way. Cajun shrimp is served atop grits. And while none of those dishes are the face of healthy whole food porn, they’re much less likely to give you the meat sweats than an 8-ounce pork chop in the middle of your plate. 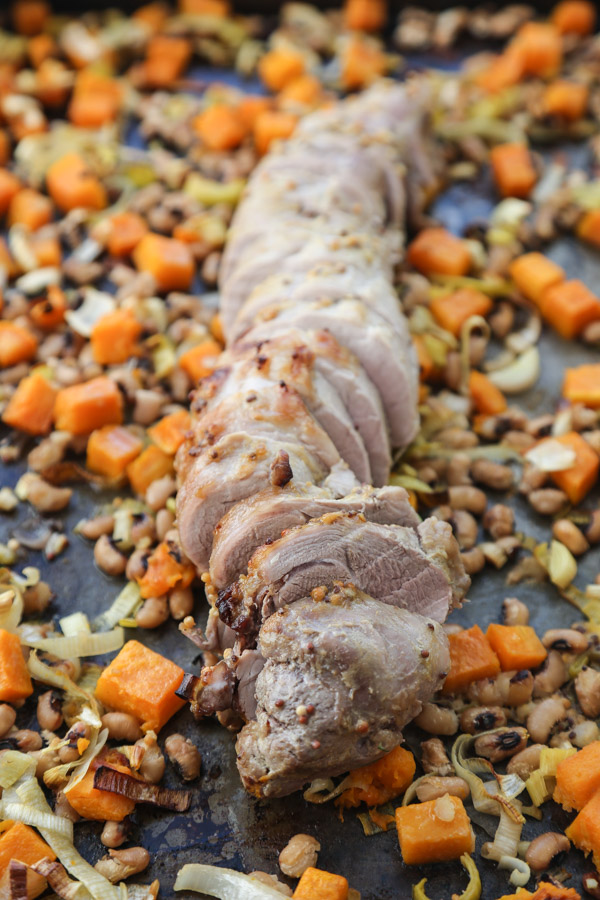 These are principles that, without even realizing it, I integrated into this Southern-inspired sheet pan roasted pork tenderloin recipe before I left for NOLA.

One of the reasons why I like working with the tenderloin is not because it’s leaner than the aforementioned pork chop, but because you can stretch it to feed more people. It may be pricier, but you don’t need much to create a deceptively grand centerpiece. And by slicing it thin, you can play tricks on certain meat-loving significant others who might not realize that their four pieces of pork amounts to only half of the pork chop they’re used to eating.

This leaves more room to fill the plate with other healthy southern favorites: butternut squash, black-eyed peas and leeks.

The best part about this meal is that it seamlessly comes together on one sheet pan. The squash gets tender and silky, the leeks sweet and caramelized, and the peas crisp and hearty. A combination of whole and Dijon mustard in the pork marinade adds a bright, peppery pop that offsets the sweetness of the veggies. And the remaining sauce can be served as a vinaigrette on the side. 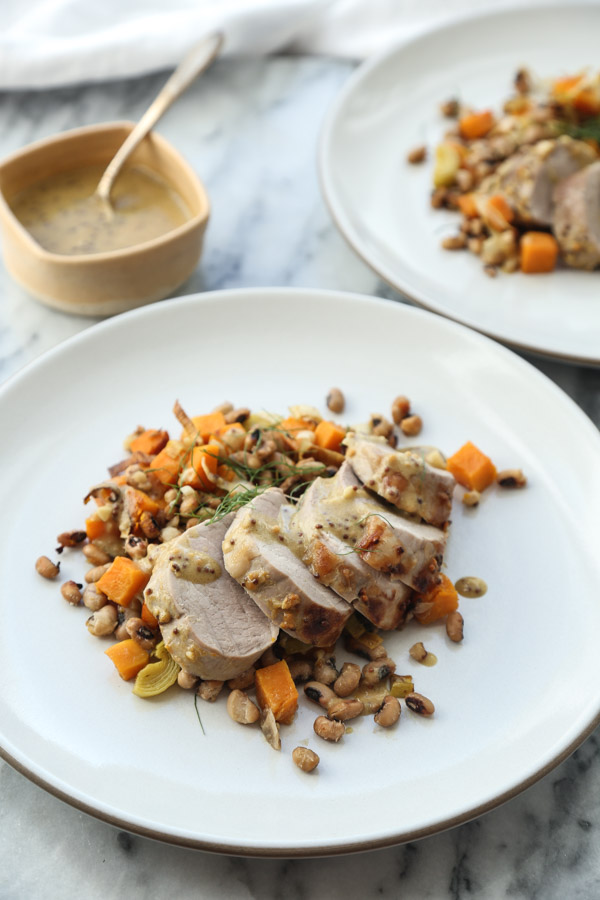 There are endless variations on this one pan meal: swap the black-eyed peas for garbanzos, leeks for shallots or delicata squash for butternut. Dress it with any spices you like, including, say, a creole blend from a recent trip.

Regardless of how many bowls of late night jambalaya and plates of ribs you’ve enjoyed in the last week, this weeknight roasted pork tenderloin recipe with warming fall veggies is a great way to find more balance while still enjoying your favorite other white meat. Or just pretend it’s made with the other other white meat (baby!) and real eyes and serve it for Halloween to scare the kiddos.

From one healthy, southern-inspired hedonist, to another, 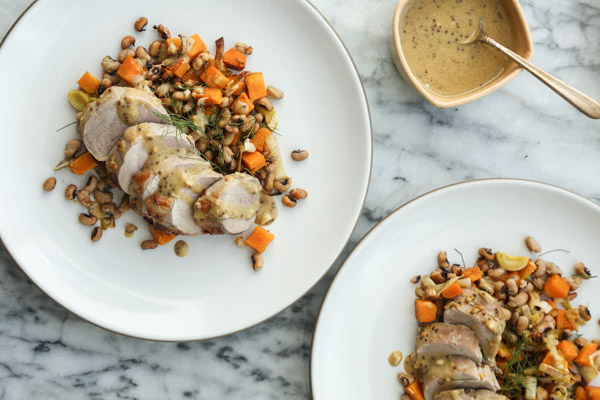 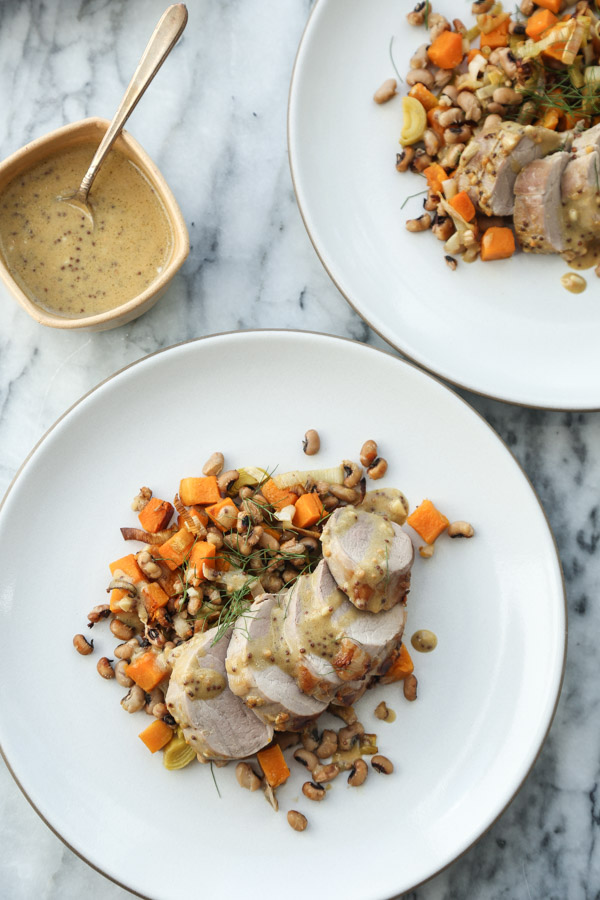 No ratings yet
print recipe
This roasted pork tenderloin recipe makes the perfect weeknight meal. It's elegant and impressive, but comes together entirely on a sheet pan! The squash gets tender and silky, the leeks are sweet and caramelized, and the peas crisp and hearty. The pork's mustard marinade adds an amazing pop that offsets the sweetness of the veggies. Serve the rest as a vinaigrette on the side.
Prep Time 20 minutes
Cook Time 35 minutes
Total Time 55 minutes
Servings 4
Author Phoebe Lapine