I like to think of this okonomiyaki recipe as the Japanese equivalent of latkes, with shredded cabbage instead of grated potato. 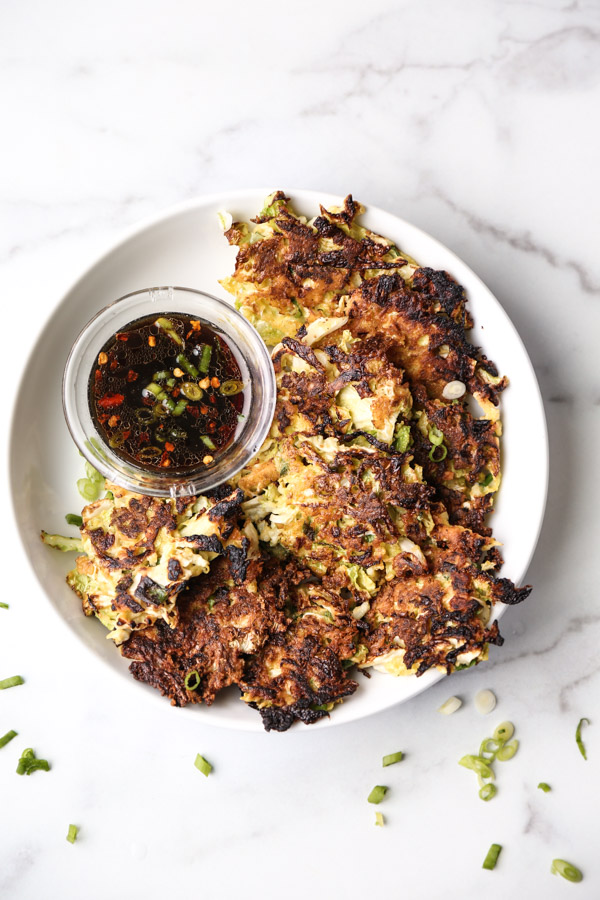 Though this makes the dish no less pantry friendly, it does certainly make the prep much easier, as grating potatoes is one of my least favorite kitchen tasks, and most likely to land me in the hospital in need of stitches.

I saw this okonomiyaki recipe on my friend Ali of Alexandra’s Kitchen site. She’s one of my absolute favorite follows for pantry inspiration (you may even remember her as the pioneer of this gluten-free bread). Like latkes, the cabbage-scallion pancakes don’t require much more than egg and flour—so little of it that really any gluten-free variety will do. I used white rice flour, but you could easily substitute chickpea, AP, or whatever else you have on hand. 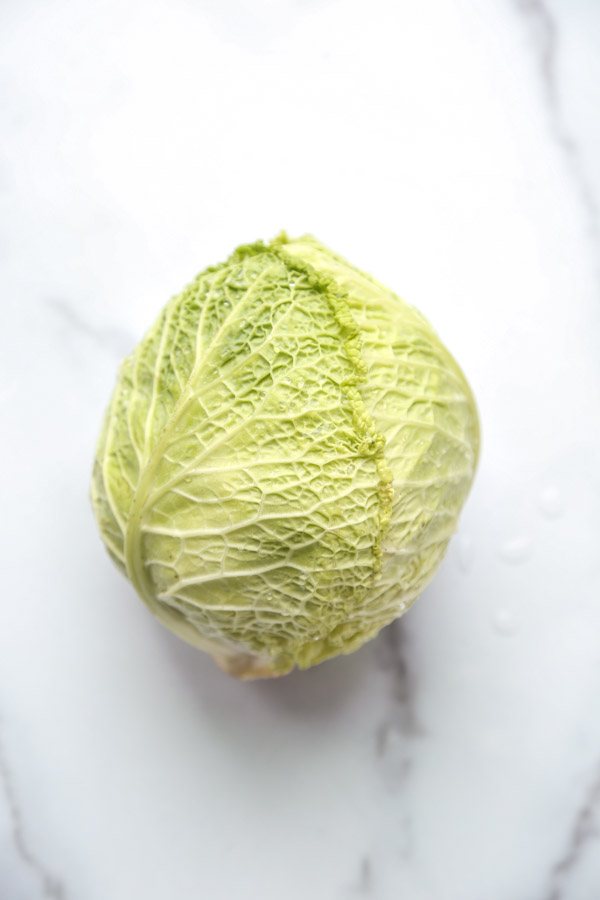 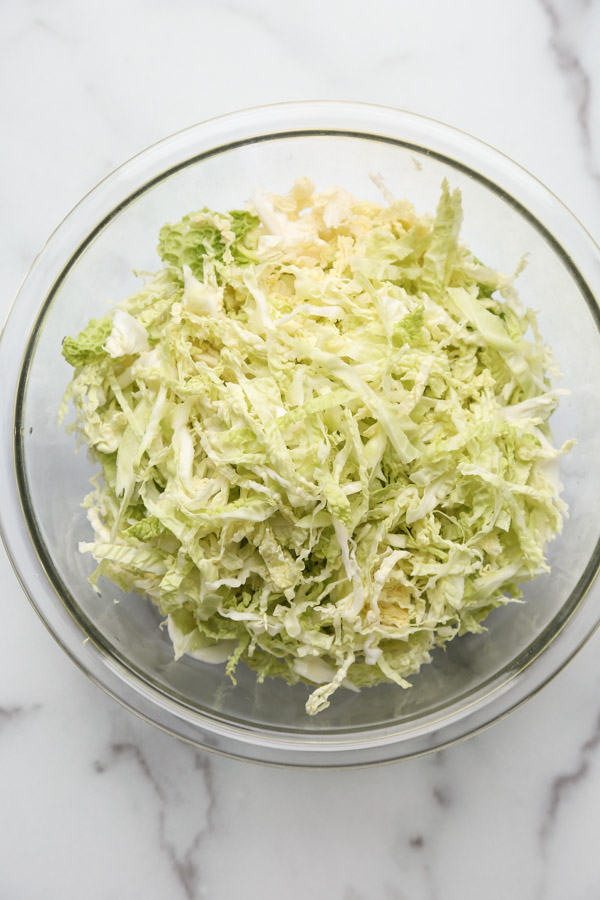 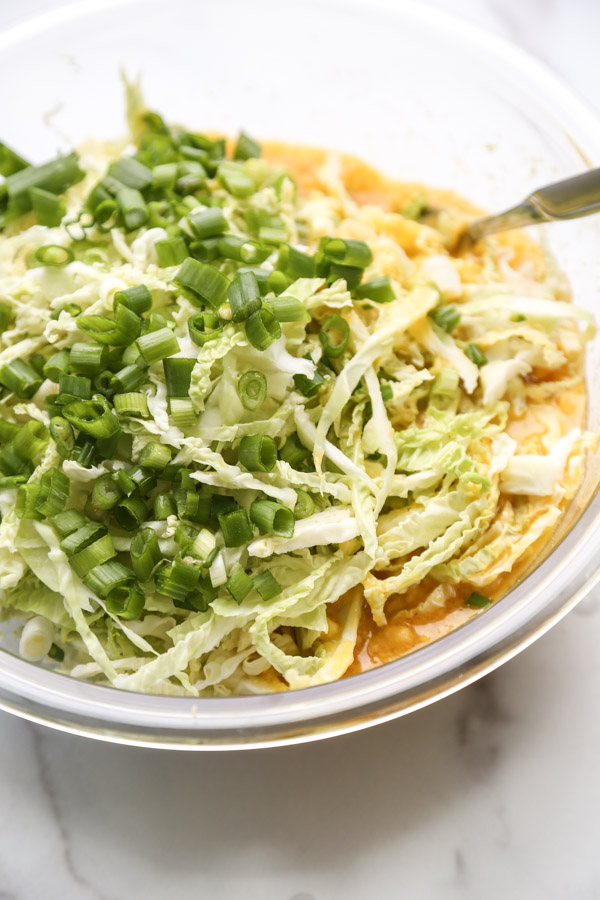 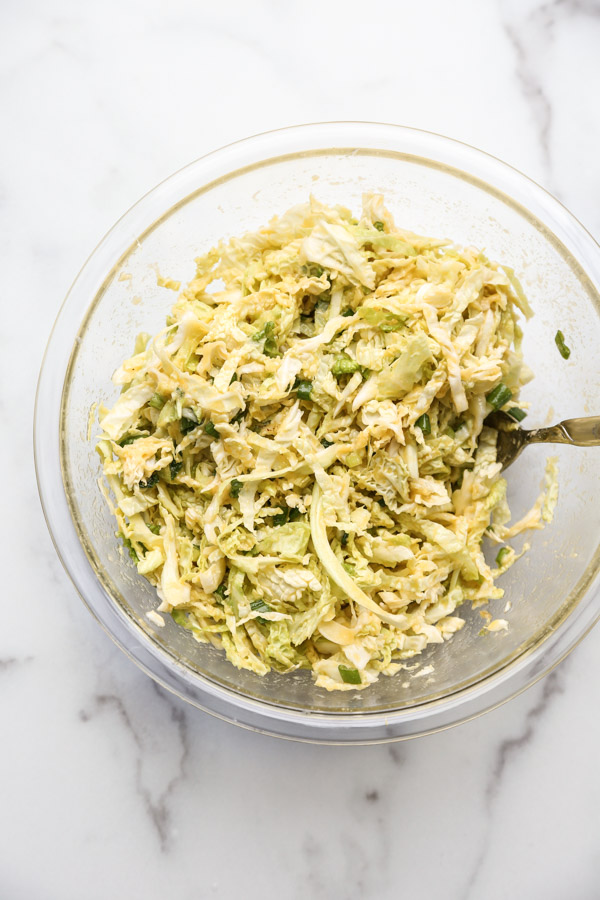 Cabbage is one of the most underappreciated pantry vegetables. Even in non-pandemic times, I usually have at least half a head lying around the crisper drawer for up to a month. Sometimes the cut ends start to become a little grey and gnarly, but all you have to do is shave it off when you’re ready to use it. It’s no wonder that so many peasant dishes from various cultures rely on it for humble, comforting dishes.

This recipe uses an entire head of cabbage, but you can easily halve it if you only have part of a head. Any remaining cabbage would be great for making a slaw when your salad provisions are running low, or mixing into soups, stir-fries and stews. 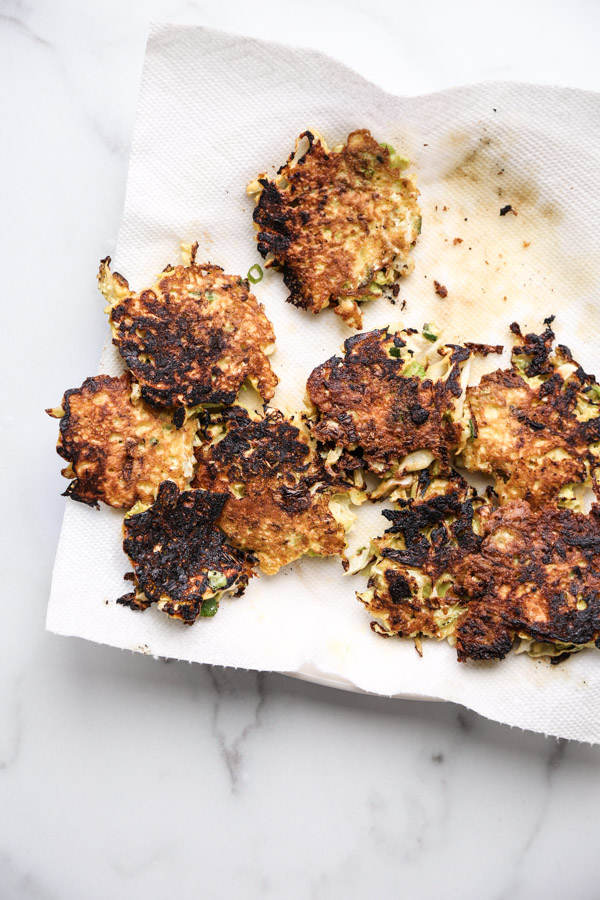 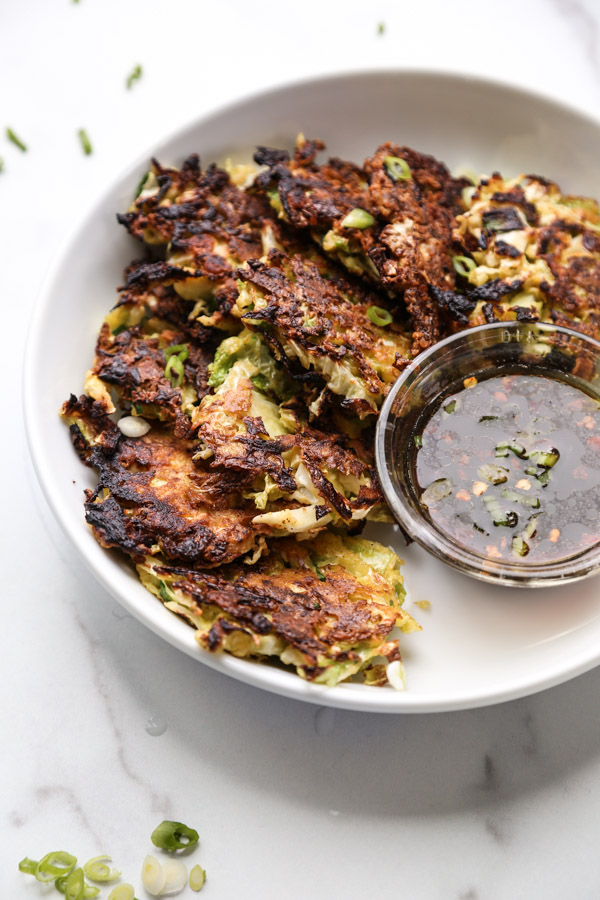 These cabbage pancakes have a little hint of tamari and sesame oil in the batter, but you could easily omit and make a non-Japanese version that’s paired with yogurt or aioli instead of the soy-sesame dipping sauce. You can even top them with some leftover Passover horseradish!

For frying, simply use a neutral oil. I love those with higher burning temperatures like grapeseed, avocado or coconut. Fritters like these also make for good make-ahead options, even if you wouldn’t think of them as such. Simply re-crisp in a 425F degree oven until sizzling and serve immediately. 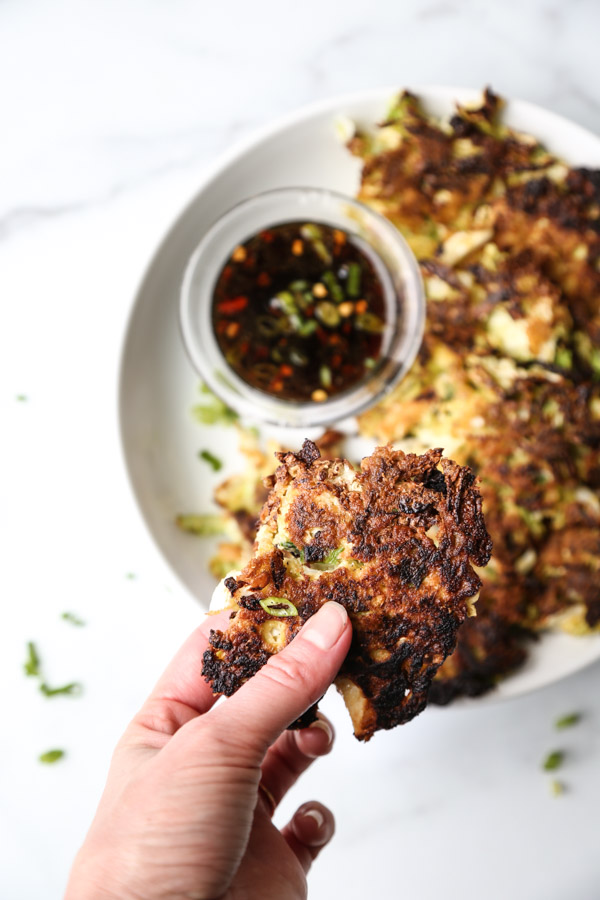 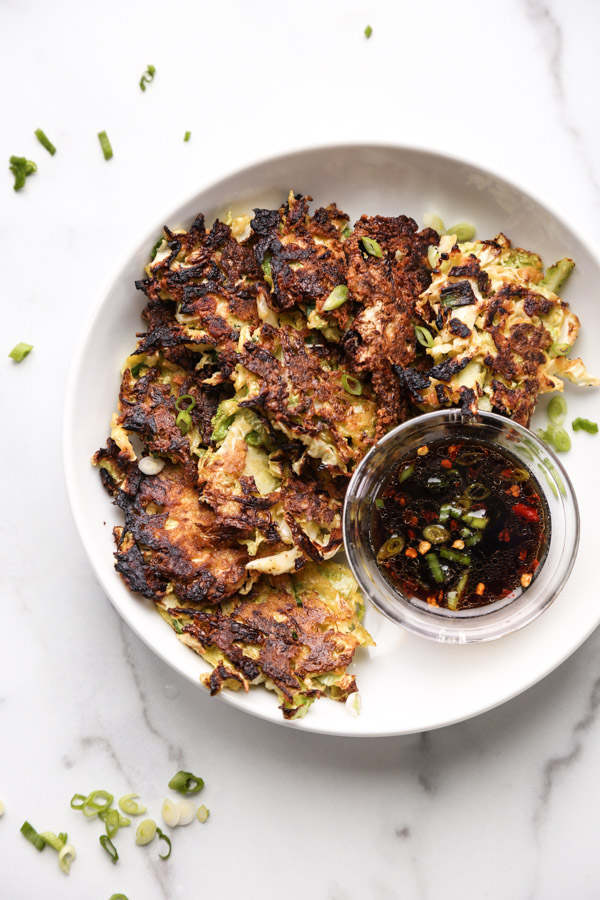 What pantry vegetable or plant have you been eating the most of lately? Tell me in the comments! 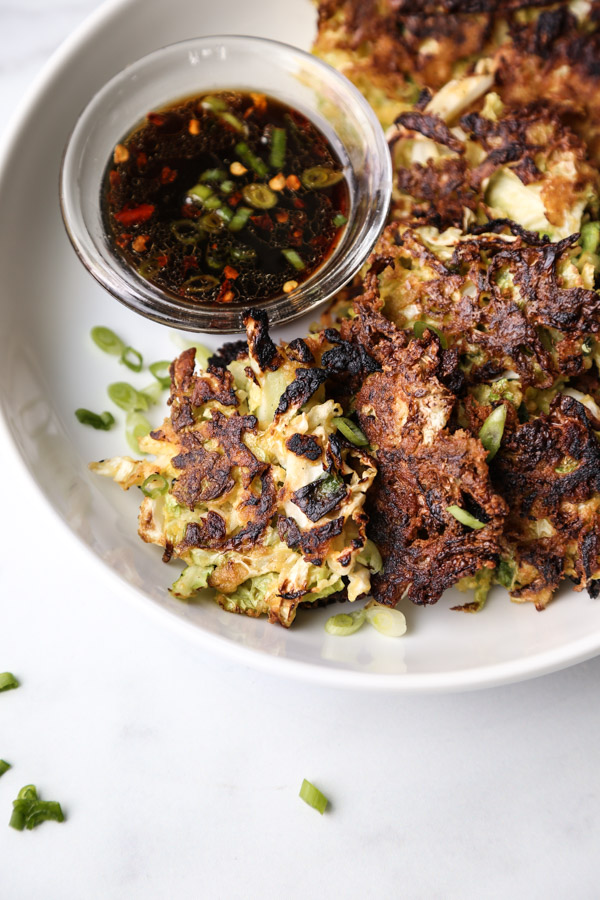 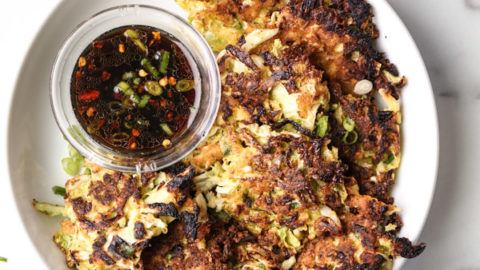 No ratings yet
print recipe
These classic Japanese cabbage-scallion pancakes get a gluten-free, easy makeover in this Okonomiyaki Recipe. They are a great way to use up leftover cabbage, and an easy method for getting more veggies in your diet even with only access to your pantry. I like to think of them as Japanese latkes! I adapted the original recipe from Alexandra's Kitchen, so if you're not GF feel free to pop over to her site for her version! To make these low FODMAP, simply use only the green parts of the scallion and limit your serving to 2 pancakes.
Prep Time 10 minutes
Cook Time 20 minutes
Servings 16 pancakes
Author Phoebe Lapine

For the dipping sauce:

If you make this, tag @phoebelapine and #feedmephoebe - I'd love to see it!
353 shares